Speaking with Jeff Mills ahead of his sold out Orchestra show in Dublin.

Light from the Outside World has been a phenomenal success. How has that experience been for you personally?

It’s been wonderful. All shows have been full and very well received. Not by just people from Electronic Music, but from listeners of Classical. I think what is most unique is that the combination of mixing the two genres together creates something new.

How does a collaborative process with an orchestra composer work? What challenges did you face?

Finding the balance between the various textures of sound of the genres is key. For instance, making sure the robust kick drum from a Roland TR-909 Drum machine doesn’t drown out the delicate sound of the flute are example – the right understanding between myself, the conductor and sound engineer in making the right chemistry is most important. All sounds should be heard clearly. For this show, we usually have about 3-4 rehearsals and good amount of this time is spent creating balance and fine tuning.

Has that become easier with time or do new challenges emerge? It’s a fascinating process.

Yes, it become easier of time. After many shows, I have a general idea of what should happen in the preparation that makes a good show and presentation. Yes, it is fascinating. I think we’re presenting this special type of collaboration at a very special time in our music history. I’m very much hope that it might have an encouraging effect on the music generations to come.

We love your new orchestra project “Planets”. Can you give us some insight into the concept?

“Planets” is a tutorial journey to (musically) visit each Planet of the 9 planets of our solar system. It was inspired by “The Planets” by composer Gustav Holst, that he created in 1918. But where my version differs, is that I used factual data about each planet to score the compositions. So, the density, mass, rotation speed and other known facts were sewn into the way I made the original sketches. This project took over 10 years to make and should be out and available next spring in various formats. In the meantime, we are scheduling live listening sessions in and around Europe.

“The Planets” by Gustav Holst was first broadcast back in 1918 in the last week of World War One. What is the significance of that composition in today’s world?

I think that one of the significant factors might be that the idea of actually traveling to and colonizing another planet is more realized than ever before. Another factor might be that because of we’re very much in the Computer Age and things are still expanding, the shift from human hands-on manual labor and computer automated/autonomous labor creates certain modifications to not just the “worker”, but to family structure, a person’s outlook about the future and so on. I wrote this score with the idea in mind that there are many other worlds to explore, that what we see around us here on Earth, is but a small portion of our possibilities.

Can you imagine being a soldier leaving the Western Front and hearing that broadcast back in 1918? What emotions do you think you would feel?

Yes, it must have been fantastic and reassuring to think that there could still be hope in a time that it might have been difficult to see or imagine – that all was not in vein or hopeless.

You and the arranger Sylvain Griotto have created a new platform and reality for this amazing piece by Holst. How did you both approach that? Was there any challenges in reinterpreting a piece that’s almost 100 years old that didn’t exist in your previous orchestra projects?

Well, it wasn’t a re-interpretation actually. I was inspired, but also I realized that the average person today has a tremendous amount of factual information about each Planet then say, the average person did in 1918. Holst wrote about 6 planets and approached the concept through Greek mythology. With this, it was based on that we know as fact – a scientific approach.

To start, I presented the 9 music sketches to Sylvain and explained how the journey should work. For instances, in truth we travel in space to each planet by being spun around each planet’s gravitational force and propelled to the next planet. This motion and the way sound loop and repeat themselves to create a energy was discussed and wrote into the score. Another known fact was about the water we now know on various planets. Sylvain and I created a rhythm and melody for this element that can be found on the composition of Earth, Mars and Pluto.

“Planets” has been recorded and then brought to Abbey Road to be mixed. Can you tell us about your experience there? Why?

One of the versions of the recording will be in surround 5.1 and I had imagined that the project and special mix-down session really needed someone that had a extra ordinary skill to be able to translate the concept and manage the sounds in the stereo field in the best way. I researched and discovered the work of Jonathan Allen, who is the senior engineer at Abbey Road Studios, so it was there that we decided it should be mixed. Jonathan had an extensive experience in dealing with surround, could read and interpret classical score. He studied in France and could communicate with Sylvain Groitto, the editor Anne Laurin more fluently. It turned out to be the best choice I could I make.

We are looking forward to seeing your “Spiral Deluxe Tour”; your first Live Band since UR. Can you give us some background on that? What can we expect from a typical show?

I used to play percussion and drums before becoming a professional DJ. I was in a few bands and we used to play Jazz and Rock fusion material. This is the style of music I listen to the most and always thought about (if I could) blend Electronic Dance and Jazz fusion together in a way that would be complimentary and something new. I tested the idea about a year ago and finally found the musicians that I thought could make it happen. The project and band is called Spiral Deluxe. A collective of artists from various backgrounds, using improvisation as a means to create in front of a live audience – so, every show can be different and special. We only rehearse a slight amount of time and figure out the rest in real time during the performance. Because the musicians are so good, it creates a unique and explorative way to make music.

What other projects can we look forward to Jeff Mills? (October 2016)

There are a few more in the works right now. I composed a new soundtrack for “Trip To The Moon” (1902) by George Melies. A collaboration project and Paris performance with the percussionist Tony Allen. I’ve recently created a project based on the film “Close Encounters Of The Third Kind” (1977), a book/CD for the 25th Anniversary of Axis Records and new label website, another classical score based on Black Holes…..and a few other things. 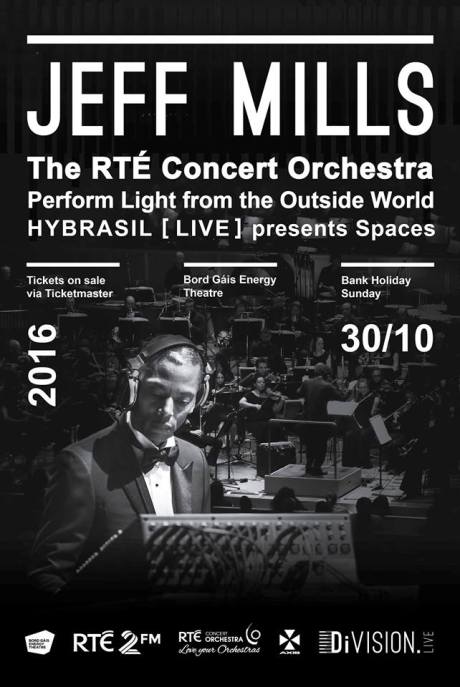