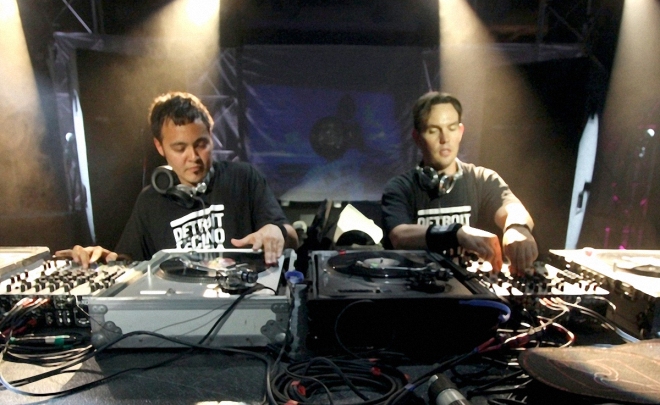 Detroit Tecno Militia are the most exciting group to come out of Detroit since “second wave” artists such as Richie Hawtin, Claude Young and Robert Hood. I caught up with Tom Linder ahead of their debut Irish show on April 11th in the Hub, Temple Bar with Ceoltronic.

Where did your journey into music begin?
The first “instrument” I ever learned to play was a pair of Gemini DD-50 Turntables. Growing up in Detroit, dance music was ubiquitous. Back then, you could turn on the radio and hear guys like Alan Oldham, Claude Young, Derrick May and Kevin Saunderson. Not to mention that there was Duane Bradley, Mojo, The Wizard, and a bunch more radio jocks that influenced everyone.

Can you tell me about the concept behind Detroit Techno Militia?
Back when my wife, then girlfriend, Angie came up with the idea, the raw and aggressive Detroit Techno sound that we were into had really fallen out of fashion here in Detroit. We were all from the school of that street-style, fast mix, multi-genre technique of ripping records one after the other. When we would play out, it would become a challenge to see which DJ could outdo the other one. Eventually, it became a natural progression to develop our own crew of DJs and Live Performers and push our sound to a higher level.

Are you looking forward to your first show in Ireland?
Absolutely! This is the first time that Detroit Techno Militia has performed in Ireland. Both DJ Seoul and I are really excited to do it. As American musicians, the Irish audiences have an awesome reputation.

What do you have in store for the show/performance?
We like to push the boundaries of what Techno DJs can do with turntables. We aren’t just sitting around up there kissing each other’s Blarney Stones. We are working the entire time.

What projects are you working on at the moment?
The Militia is always in production mode and working on new sounds. The show in Dublin is the kickoff for the month-long European tour. Our DTM 2×4 appearances feature DJ Seoul and myself performing on four turntables at the same time with vinyl records. It’s really exciting since our first show is in a new city and in a new country! Be ready Dublin!